WHAT IS CASSAVA(Manihot spp). Cassava just like yam, is a root and tuber crop. It has underground roots which can be consumed by man and livestock animals after processing.

It has other advantages over yam, in that it can grow in relatively poor soil and in low rainfall area. The root is also rich in carbohydrates.

The tubers (root tubers, tuberous roots, storage roots) are true roots modified to function only as storage organs that cannot absorb
water or plant nutrients from the soil and cannot be used for vegetative propagation or as planting material.
The older root tubers become lignified.
The mature cassava storage root has 3 distinct tissues:

The bush is cleared with cutlass. Stumping is done and hoe could be used to make heaps or ridges. Ploughing, harrowing and ridging can also be done mechanically.

The ground should be dug well twice.
Double digging is needed to make the soil soft and to kill the weeds.
Ask a field officer of the Ministry of Agriculture to recommend a suitable variety for the cassava project.

A light sandy soil best with good drainage but almost any soil type can be used except salty or waterlogged soils.
Good yields can be obtained on heavily cropped soils so cassava is suitable as the last crop in crop rotation.

During drought cassava stops growing and drops its leaves but it usually recovers well after new rain.
Cassava is a shrub to about 1-3m, thin stems, large palm-shaped leaves, with high yield of tuberous roots, the main part that is eaten,
but also leaves as edible vegetables. A most productive use of subsistence land, but all cassava is poisonous containing hydrocyanic acid, with the more toxic varieties
However, thorough cooking denatures the harmful toxins to make it safe to eat.

By stem cuttings which are planted from March to September. 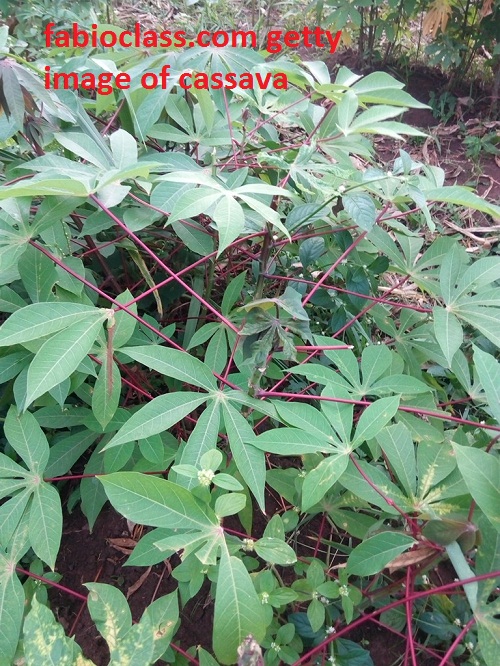 how to Space cassava:

Cassava is spaced 1m by 1m

A stem cutting of 25 – 30cm long is pushed into the ridge or heap slanty at an angle of45°and C of it buried. Sprouting occurs 7- 14 days later.

(i) Weeding: This is done regularly
(ii) Fertilizer Application: Apply 250kg/ha of NPK. Fertilizer four to six weeks after planning.

Cassava is a perennial, but cultivated as an annual crop, woody shrub with latex in all parts, 1 to 6 m in height.
Many varieties and cultivars exist but most are cultigens, i.e. known only as cultivated forms.

The bitter and sweet varieties of cassavas were formerly separate species, Manihot esculenta the bitter cassava and Manihot
palmata the sweet cassava.

However, the bitterness depends on many factors including soil, climate and location so now cassavas are informally divided into bitter
and sweet types and sometimes into short season and long season cultivars.

This occurs between 8 – 15 months depending on varieties/

Use cutlass to remove some soil and pull the stem gently so that the tubers are pulled along or, use cassava puller.

Cassava is an important source of starchy food in tropical regions.
Its cultivation needs little labour input so it is cheap to produce.
Cassava is a benchmark for food security because it is affordable by the poor.

Pest of Cassava and control methods

(1) Variegated Grasshopper: Adults and nymphs eat up the leaves and young and eat up the tubers.
Control:
(i) Trapping
(ii) Shooting with gun
(iii) Wire fencing round the farm

Cassava has the scientific name, Manihot esculenta and is in the Family Euphorbiaceae, the spruce family, which includes natural rubber
(Hevea brasiliensis) castor oil (Ricinus comunis) and ornamentals, e.g. poinsettia (Euphorbia sp.).
Latex occurs in all parts of the plant and a related species Manihot glaziovii was formerly used in commercial rubber plantations to make rubber.
Most varieties of cassava are diploid with 2n chromosome number = 36.

Diseases of Cassava and control methods

It is caused by virus which is transmitted by a piercing and sucking insect (white flies).
Symptoms
Symptoms include vein clearing and distortion of the leaves and stunted plants
Control
(i) Grow resistant varieties
(ii) Uproot and burn infected plants
(iii) Use disease free planting materials
(iv)

It is caused by bacteria which are transmitted by infected cuttings.
Symptoms
These include angular, water- soaked area of discoloured leaf tissue, blighting, wilting and reduction in yield.
Control:
(i) Use resistant varieties
(ii) Use lean and disease-free stem cuttings

It is caused by a fungus.

check out these recent posts